The unfolding political crisis in Myanmar seems to have put India in a quagmire of sorts, with disagreements cropping up between the Centre and the Mizoram government over policies to deal with refugees.

In news: Myanmar in turmoil, let in refugees: Mizoram CM writes to PM
Placing it in syllabus: Foreign Affairs

Status and Magnitude of the Problem: 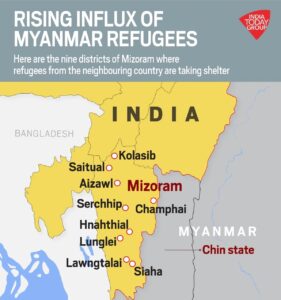 Cross-Border Ties: There are more than 250 villages with almost 3,00,000 populations living within 10 km of the India-Myanmar border. In 2018, both Indian and Myanmar agreed to streamline the movement of people within 16 km of the border.

Previous such Refugee problem in Myanmar:

Need for the Refugee Law in India

Agreements on Refugees and India’s Position on them

Convention on the Status Relating to Refugees:

Its four key objectives are to:

Mould your thought: The influx of refugees fleeing the military junta in Myanmar is turning into a foreign policy concern for India. Discuss.