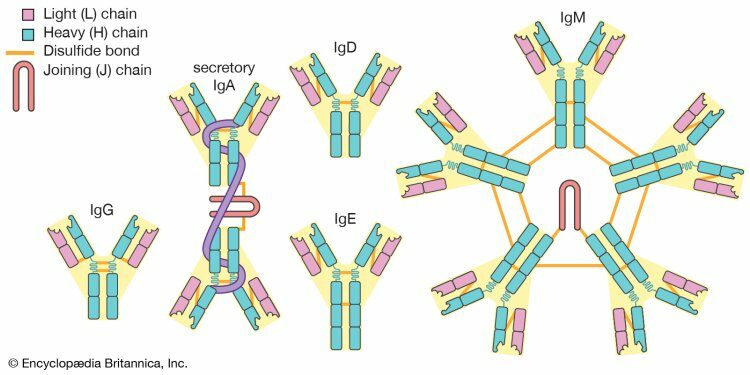 IgA – It accounts for about 15 percent of the antibodies in the human system, making it the second most common type of immunoglobulin. Only about 6 percent is found in the blood serum. It is seen in a wide variety of biological secretions, including milk, saliva, tears and mucus. It tends to be nonspecific in terms of the types of foreign presences it targets. Its presence on mucus membranes makes it an important gate-keeper in physically vulnerable locations, or the spots at which microbes might easily find ways deeper into the body.

IgG – It is the dominant antibody in the human body, accounting for a whopping 85 percent of all immunoglobulins. It is found chiefly in the blood and lymph. It has the unique ability to cross placenta in pregnant women, allowing it to protect the unborn fetus and newborn baby. IgM

IgM – It is the colossus of immunoglobulins. IgM has a short half life (about five days) and makes up approximately 13 to 15 percent of serum antibodies. It is also the first line of defense among its four antibody siblings, being the first immunoglobulin made during a typical immunological response. IgM agglutinates invading material, compelling individual pieces to stick together for easier clearing from the body.