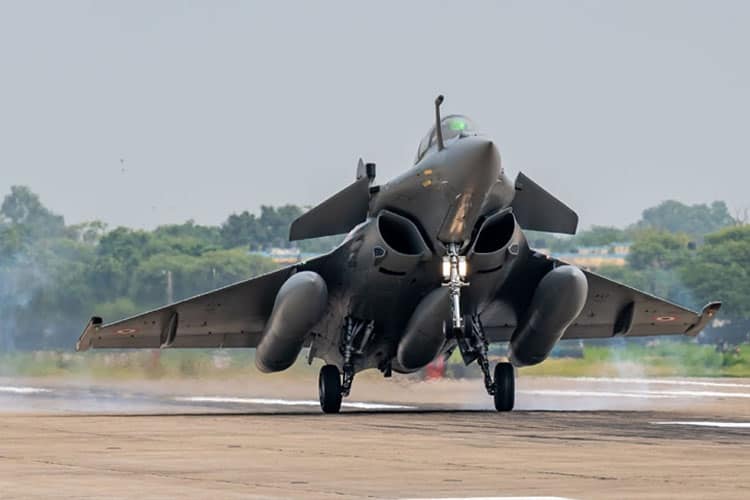 The first five Rafale fighter jets would be inducted at the Air Force Station in Ambala on 29 July and their first mission could be in Ladakh where the Indian Air Force (IAF) is conducting Combat Air Patrol (CAP) to provide back up to the soldiers on ground engaged in a tense stand-off with China.

According to the contract signed in September 2016, 12 aircraft are supposed to be delivered every year. French defence major Dassault Aviation, which is manufacturing the Rafale jets, had since October last year handed over to the IAF a total of nine aircraft. The 10th is undergoing acceptance trials by IAF pilots in France.

Once inducted, the Rafale with its cutting edge missiles will be the most modern and deadly fighter in this region. The IAF has said that its aircrew and the ground crew have undergone comprehensive training on the aircraft, including its highly advanced weapons systems and are fully operational now.

The five Rafale jets will take off from Istres in France and fly to the French airbase in Al Dhafra near Abu Dhabi in the UAE. After a night halt, the jets will fly to Ambala in Haryana, where the IAF’s 17 Squadron ‘Golden Arrows’ is based.

The Rafale jets have excellent weapon carriage capability and supercruise – the ability to go supersonic without afterburners. It also has SPECTRA defensive aids system which has the capability of processing and amalgamating information from various sensors to safeguard the aircraft. Equipped with a wide range of weapons, the Rafale is intended to perform air supremacy, interdiction, aerial reconnaissance, ground support, in-depth strike, anti-ship strike and nuclear deterrence missions. The Rafale is referred to as an “omnirole” aircraft by Dassault.