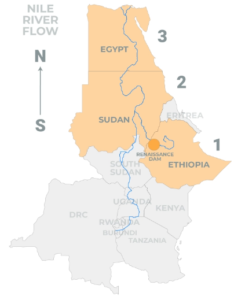 The eventual site for the Grand Ethiopian Renaissance Dam was identified by the United States Bureau of Reclamation in the course of the Blue Nile survey, which was conducted between 1956 and 1964 during the reign of Emperor Haile Selassie. Due to the coup d’état of 1974, however, the project failed to progress. The Ethiopian Government surveyed the site in October 2009 and August 2010. In November 2010, a design for the dam was submitted by James Kelston.