In news- An underwater volcano, Fukutoku-Okanoba, that exploded in the Pacific Ocean, off Japan, mid-August, is posing a risk to the passage of planes and ships.

About the Fukutoku-Okanoba volcano-

A volcano is a vent or fissure in Earth’s crust through which lava, ash, rocks, and gases erupt. The earth’s mantle contains a weaker zone known as the asthenosphere which contains magma. Material that flows to or reaches the ground comprises lava flows, volcanic bombs, pyroclastic debris, dust, ash, and gases. The gases may be sulphur, nitrogen compounds, and trace amounts of argon, hydrogen, and chlorine.

Volcanoes are classified based on the nature of eruption and the form developed at the surface. 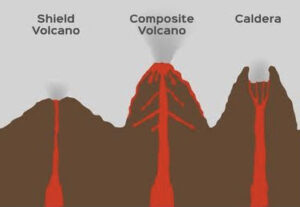 Eg: Mayon Volcano in the Philippines, Mount Fuji in Japan.