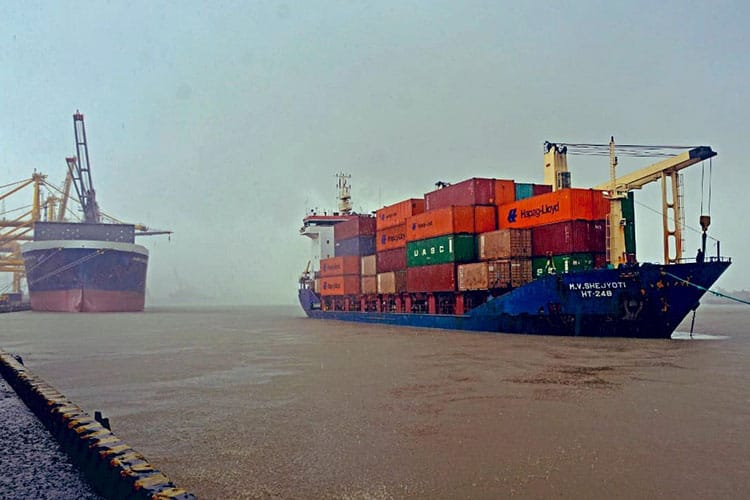 The Shipping Ministry flagged off the first trial movement of a container ship from Kolkata port to Bangladesh’s Chattogram port for transporting cargo to Assam and Tripura. This has been done under the Agreement on use of Chattogram and Mongla Ports for movement of India’s transit cargo through Bangladesh.

The route will open doors of new opportunities for both the countries. It will provide the alternative and shorter route to connect the northeast region through Bangladesh. It  will be a  new chapter in India-Bangladesh maritime relations. The consignment of the trial movement includes two TEUs carrying TMT steel bars destined for West Tripura district and two TEUs carrying pulses destined for Karimganj, Assam. After reaching Chattogram, the consignment will move to Agartala on Bangladeshi trucks.

The trial runs highlight the efforts that both sides have undertaken to strengthen the connectivity between Bangladesh and the northeastern states of India, as per the understanding reached between the two countries at the highest level, during the visit of Bangladesh Prime Minister to India in October 2019, when the Standard Operating Procedures for the use of Chattogram and Mongla ports for movement of goods to and from India, were concluded.

It will reduce distance and time taken in transportation of goods for India and is a win-win for both the economies. Job creation, investment in the logistical sector, enhanced business services and revenue generation are advantages that will accrue to Bangladesh. Bangladeshi vessels and trucks will be utilized to move the Indian cargo.

India and Bangladesh have enhanced cooperation in shipping and inland water trade in the recent years. Under the Protocol on Inland Water Transit and Trade, in addition to the six existing Ports of Call, five more in each country have been added recently. Dredging of inland waterway routes is ongoing under an MoU, signed by the two countries on development of fairway in selected stretches of Bangladesh waterways with the Government of India bearing 80% of the project expenditure and the balance being borne by the Government of Bangladesh. Cruise services have also commenced between the two countries promoting tourism and people to people contacts.