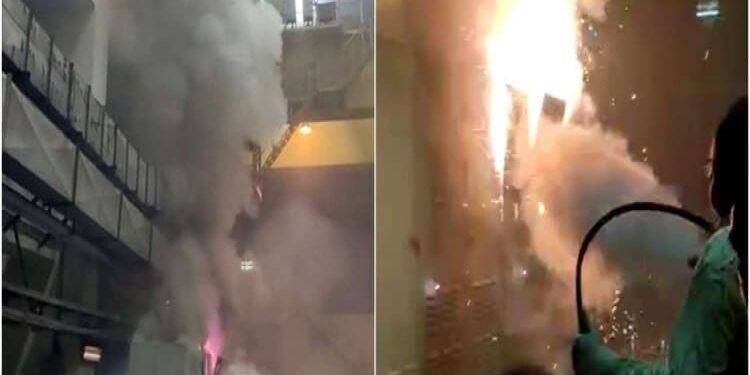 Nine people, including five engineers, were killed in a fire in one of the units of the state-run hydel station of the Srisailam project, which is on the Telangana side of the inter-State border across the Krishna river. Their bodies have been recovered. The fire broke out from a panel board in the150 MW unit and gradually engulfed the entire area. The 17 engineers and technical staff on duty made frantic efforts to control the fire. Eight of them, who were in the upper floors, managed to escape through an underground tunnel linked to the power station.

A fire in a hydroelectric station located close to unlimited quantities of water would seem to be a contradiction, but as the deadly blaze in the Srisailam power plant shows, the risk is very real. At 900 MW capacity, the plant on the left bank canal of the Krishna is one of the biggest contributors to the Telangana State Power Generation Corporation; another branch serves Andhra Pradesh. In Srisailam, the fire appears to have started in a control panel during maintenance. The victims were unable to make an exit through an escape tunnel and were overwhelmed by smoke, while others at a different level could flee in time. Going by official accounts, the smoke made it difficult even for rescue personnel to enter the four-storeyed structure.

The power station is towards Domalapenta village of Amrabad mandal in Nagarkurnool district. The plant is located 1.2 km below the surface and surrounded by terrain on one side. It overlooked the river and faced the dam on the other side. An underground tunnel is the sole entry to the station. Generation at the powerhouse commenced a month ago when Srisailam, which is on the upper reaches of Nagarjunasagar on the Krishna river, started flooding.

Large hydroelectric power plants are usually built well below surface level, where generation, control and transmission equipment are located. Handling a fire becomes complicated in such circumstances, and safety features have to be extremely reliable. IEEE standards for substation fire protection, issued a quarter century ago, lay down norms for fixed and portable ventilation systems that can remove heavy smoke — as seen in Srisailam.

Use of fire-retardant materials in construction, dual exits, easy vertical escape routes using staircases and alarm systems are all part of safety codes. Whether these features were available in the Telangana power plant, and if they were, why the personnel could not use them to quickly escape the inferno should be investigated. The dam fire is primarily the state government’s responsibility, but the Centre should also take the opportunity to review safety in places such as Jharkhand, where extensive underground coal field fires have affected remote communities. India loses many lives to fires each year: at 12,748 accidental deaths in 2018, nearly double the number caused by forces of nature, according to NCRB data. Only a rigorous adherence to safety codes can reduce this shocking toll.