Territory of PoK & type of rule 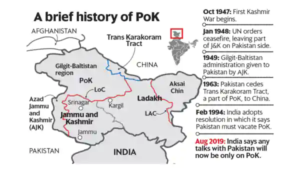 Elections in PoK & its Assembly