The seismic gap reminds of the big one which is coming. Are the mild occurrences an indication of what lies ahead Indian subcontinent has experienced some of the devastating earthquakes. Though codes and regulations are in place to mitigate the losses, very little is done to implement the same. One has to read the topic from mains point of view to understand preparedness as well as precautions to be taken to lessen the after effects of earthquakes.

In news Delhi-NCR has experienced 11 mild earthquakes since May.
Placing it in syllabus Disaster Management/Geography – Earthquakes 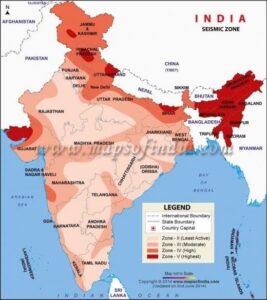 Zone II: This is seismically the least active region. It covers parts of India that are not included in Zone III, IV and V.

Zone IV: It covers parts of Jammu and Kashmir and Himachal Pradesh, National Capital Territory (NCT) of Delhi, Sikkim, Northern parts of Uttar Pradesh, Bihar and West Bengal, parts of Gujarat and small portions of Maharashtra near the west coast and Rajasthan.

Zone V: This is seismically the most active region. Parts of the Himalayan boundary in North and Northeast India, the Kutch area in the West falls here. Remaining parts of Jammu and Kashmir, Himachal Pradesh, Uttarakhand, part of North Bihar and Andaman and the Nicobar Islands are included.

Long-period earthquake: A long period earthquake occurs while the injection of magma into the surrounding rocks. These all happen due to the pressure changes among the layers of the earth.

NDMA guidelines on earthquake NDMA released its earthquake guidelines in 2007, the basic premise of which includes six pillars of Earthquake management.Earthquake-Resistant Design and Construction of New Structures: Data on past earthquakes show that over 95% of the lives lost were due to the collapse of buildings that were not earthquake-resistant. Though there are buildings codes and other regulations which make it mandatory that all structures in earthquake-prone areas in the country must be built in accordance with earthquake-resistant construction techniques, new constructions often overlook strict compliance to such regulations and building codes.

Seismic Strengthening and retrofitting of Lifeline and Priority Structures: Most of the buildings in seismic Zones III, IV and V are not earthquake-resistant and are potentially vulnerable to collapse in the event of a high intensity earthquake. Due to problems of feasibility, these guidelines recommend the structural safety audit and retrofitting of select critical lifelines structures and high priority buildings.

Regulation and Enforcement: A periodic revision of the codes and standards relating to earthquake-resistant construction will be undertaken by drafting groups in keeping with international practices. Codes developed by other organisations such as the Ministry of Shipping, Road Transport and Highway (MoSRTH), the Atomic Energy Regulatory Board (AERB) etc… will also be updated and made consistent with the current state-of-the-art techniques on earthquake-resistant design and construction.

Awareness and Preparedness: A comprehensive awareness campaign will be developed and implemented on the safe practices to be followed before, during and after an earthquake. A handbook on earthquake safety will be prepared for the general public highlighting the safety of persons (i.e., indoors, outdoors, and driving), buildings and structures and non-structural contents of buildings and is available on NDMA site.

Capacity Development (Including Education, Training, R&D and Documentation: The developments of high-quality education materials, textbooks, field training and the improvement of the quality of teaching at all levels will be given due emphasis. Education and training programmes will be designed, with greater attention on developing the capacity and skills of trainers and trained teachers.

Response: The management and control of the adverse consequences of future earthquakes will require coordinated, prompt and effective response systems at the district and the community levels. Many of the components of response initiatives are the same for different types of disasters and systems need to be developed considering the multi-hazard scenario of various regions in order to optimally utilise available resources.

Critical Areas of Concern for the management of earthquakes in India

Mould your thought What are Critical Areas of Concern for the management of earthquakes in India? Brief about the NDMA guidelines on earthquakes.