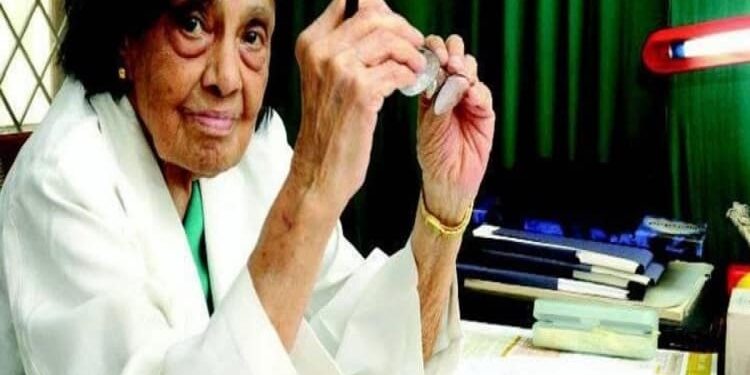 A strong-willed woman, a pioneer in cardiology and a doctor with a heart of gold – this is how the medical fraternity remembers 103-year-old cardiologist Dr Padmavati Sivaramakrishna Iyer, known simply as Dr Padmavati, who passed away after contracting Covid-19 earlier this month. She was admitted to the National Heart Institute (NHI) and later developed pneumonia. She was put on ventilator support but suffered a cardiac arrest.

The founding director of NHI, she was awarded the Padma Bhushan in 1967 and the Padma Vibhushan in 1992. She was also the recipient of Harvard Medical International Award, Dr BC Roy Award and Kamala Menon Research Award. Born in 1917 in Burma, now Myanmar, she graduated from Rangoon Medical College from where she started her career in cardiology. Soon after she completed her studies, Japan invaded Burma in 1942. Dr. Padmavati, with her mother and four sisters, fled the country, taking the last flight to India. She was eventually reunited with her father and brothers when World War­II ended.

In 1949, Dr. Padmavati moved to London as a fellow with the Royal College of Physicians in London and the Royal College of Physicians in Edinburgh. She studied in Sweden before receiving a 1949 fellowship with the Johns Hopkins University’s Department of Paediatrics. In Baltimore, she trained under Dr. Helen Taussig, who pioneered the first surgeries on ‘blue babies’, or babies born with congenital heart defects. In 1952, she joined Harvard Medical School. She returned to India in 1953.

In 1967, she took over as Director-Principal of Maulana Azad Medical College where she also set up a Cardiology Department. She then introduced the DM course in Cardiology and other super specialities like the first coronary care unit and the first coronary care van in India. She also established North India’s first Cardiac Catheterisation Laboratory at Lady Hardinge Medical College in 1954. Though Dr. Padmavati had retired from active practice a few years ago, she would still meet older patients and remain updated about medical research and literature. She often attributed her longevity to her genes and disciplined lifestyle.