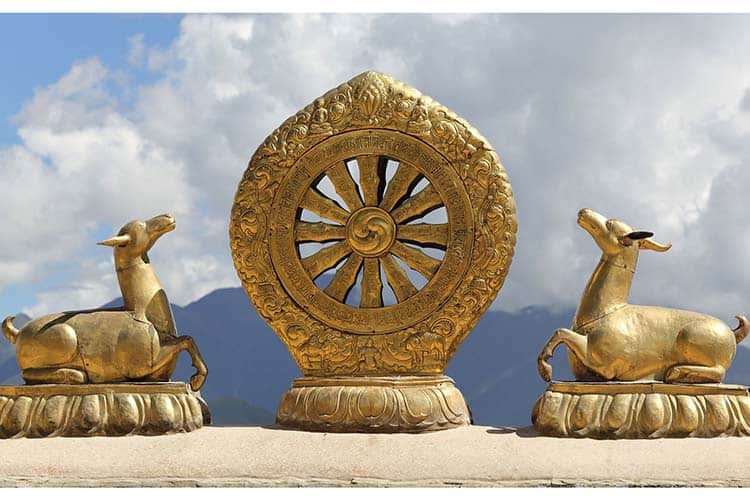 The Dhamma Chakra Day celebrations are being organized by the International Buddhist Confederation (IBC) in partnership with the Ministry of Culture, Government of India. This follows  a very successful hosting of Virtual Vesak and Global Prayer Week by IBC and the Ministry.

The Asadha Poornima celebrations are being observed as Dhamma Chakra Day. The day’s events will be streamed from Mulagandha Kuti Vihara, Sarnath and Mahabodhi Temple, Bodhgaya in association with Mahabodhi Society of India and Bodhgaya temple management committee. Royalties, supreme heads of the buddhist sanghas and eminent masters and scholars from around the world and IBC chapters, member organizations are participating.

In Buddhism, the Dharma Chakra is widely used to represent the Buddha’s dharma (Buddha’s teaching and the universal moral order), Gautama Buddha himself and the walking of the path to enlightenment, since the time of early Buddhism. The symbol is also sometimes connected to the Four Noble Truths, the Noble Eightfold Path and the dependent origination (Pratityasamutpada).

The Buddha is said to have set the wheel of dharma in motion when he delivered his first sermon, which is described in the Dhammacakkappavattana Sutta. This ‘turning of the wheel’ signifies a great and revolutionary change with universal consequences, brought about by an exceptional human being.

It provides a platform for the global Buddhist community to share its wisdom and meaningfully participate in the ongoing global social and political discourse, while at the same time preserving and promoting its shared heritage.