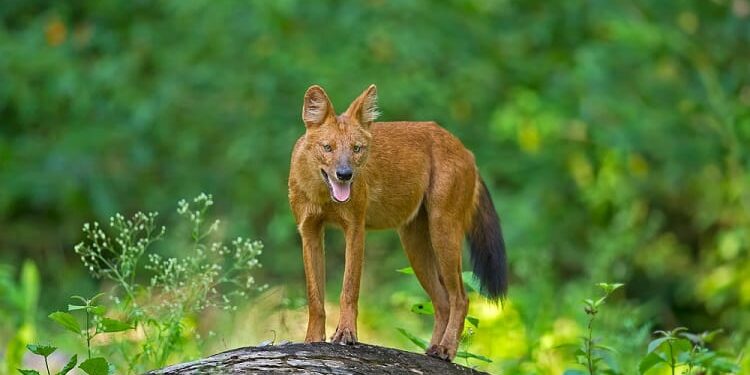 The three States are adequately equipped to maintain their high ranks in consolidating forest habitats and recovering dhole populations by increasing prey density and reducing the pressure on forests. On the other hand, the study said, Arunachal Pradesh, Chhattisgarh, Odisha, Telangana and Goa will need to increase financial investments in the forest and wildlife sectors, and reduce the ease of granting forest clearances for infrastructure projects.

It also found that improving habitat conditions and prey densities in the Eastern Ghats of Andhra Pradesh, Telangana and Odisha would “strengthen the link” between dhole populations in the Western Ghats and central India. The paper titled ‘A strategic road map for conserving the endangered Dhole Cuon alpinus in India’, was published recently in Mammal Review.

Through the study, the scientists explored the conservation tenets of retention, recovery and restoration of dholes in India, said to be a global stronghold for the species, in the context of large carnivores facing high extinction risk. Dholes play an important role as apex predators in forest ecosystems. Besides the tiger, the dhole is the only large carnivore in India that is under the International Union for Conservation of Nature’s ‘endangered’ category. As a country that perhaps supports the highest number of dholes in the world, India still does not have targeted management plans for scientific monitoring of the species. The  study recognises taluks and States that need to be prioritised, and thereby offers a primer for designing a country level plan to conserve their populations.

The wild dog of Asia was once found throughout much of the continent, but this species is now endangered and has a much restricted range. The dhole has a broad skull and a short, broad muzzle. The fur on the back and flanks is reddish brown, while the neck, chest and undersides are white or lightly coloured. The dhole is found in a wide variety of habitat types, including deciduous and evergreen forests and alpine steppe. The declining population trend is expected to continue, and the range of the dhole is much fragmented and reduced.