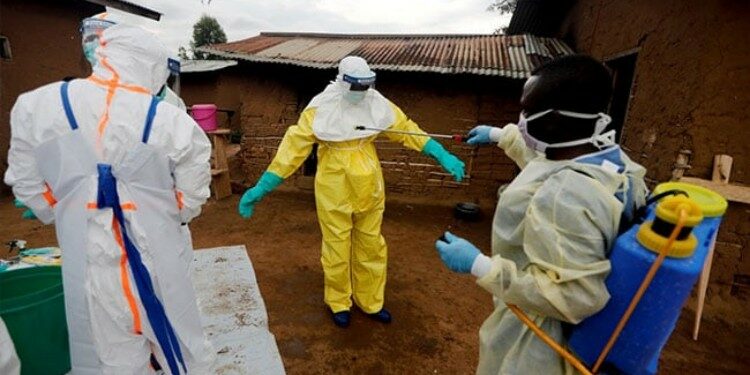 The Democratic Republic of the Congo (DRC) officially declared the end of the 12th Ebola outbreak, which killed six people in its eastern province of North Kivu. Since the outbreak was declared on February 7, 2021, a total of 12 cases have been reported, including six deaths in the province. The outbreak was contained using Merck’s Ebola vaccine, which was given to more than 1,600 of the patients’ contacts, and contacts of contacts, the international medical charity Doctors Without Borders (Medecins Sans Frontieres, or MSF) said.

In news: Congo declares the end of the 12th Ebola outbreak in the country
Placing it in syllabus: Disaster Management

What is Ebola virus disease?

It is caused by an infection with a group of viruses within the genus Ebolavirus, which include:

Ebola virus was first discovered in 1976 near the Ebola River in what is now the Democratic Republic of Congo. Since then, the virus has been infecting people from time to time, leading to outbreaks in several African countries.

Based on similar viruses, scientists believe EVD is animal-borne, with bats or nonhuman primates being the most likely source. Infected animals carrying the virus can transmit it to other animals, like apes, monkeys, duikers and humans.

Primary signs and symptoms of Ebola often include some or several of the following:

Many common illnesses can have the same symptoms as EVD, including influenza (flu), malaria, or typhoid fever. Therefore, it can be difficult to clinically distinguish EVD from other infectious diseases. Many symptoms of pregnancy and Ebola disease are also quite similar.

Confirmation that symptoms are caused by Ebola virus infection are made using the following diagnostic methods:

What is a Global Health Emergency?

The World Health Organisation defines a global health emergency, also known as a Public Health Emergency of International Concern as “an extraordinary event which is determined to constitute a public health risk to other states through the international spread of disease and to potentially require a coordinated international response”.

This definition implies a situation that is:

It is an event where disease has the risk to spread internationally.

The WHO outlines how one of the defining factors of such a pandemic is when an international response may be required; taking in a multi-national approach to containing the spread of disease, like Coronavirus.

The declaration of such an emergency inclines countries to step-up their preparation and prevention against the spread of the virus.

How is Ebola spread?

The virus spreads through direct contact (such as through broken skin or mucous membranes in the eyes, nose, or mouth) with:

People remain infectious as long as their blood contains the virus.

When people become infected with Ebola, they do not start developing signs or symptoms right away. This period between exposure to an illness and having symptoms is known as the incubation period.

A person can only spread Ebola to other people after they develop signs and symptoms of Ebola.

What are zoonotic diseases?

The common ways by which people can get infected with germs that can cause zoonotic diseases include:

Waterborne: Drinking or coming in contact with water that has been contaminated with feces from an infected animal

Which countries were affected by Ebola?

EVD first appeared in 1976 in 2 simultaneous outbreaks, one in what is now Nzara, South Sudan, and the other in Yambuku, DRC.

The latter occurred in a village near the Ebola River, from which the disease takes its name.

The 2014–2016 outbreak in West Africa was the largest Ebola outbreak since the virus was first discovered in 1976. The outbreak started in Guinea and then moved across land borders to Sierra Leone and Liberia. 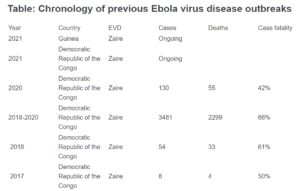 Mould your thought: Write a short note on the origin, spread and management of Ebola Virus Disease.