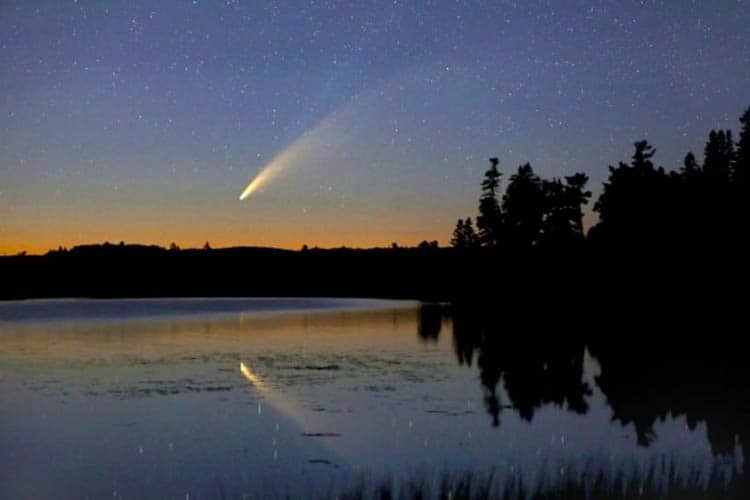 Officially known as C/2020 F3, Comet NEOWISE is a comet that was discovered on March 27, 2020, by NEOWISE, the asteroid-hunting afterlife of the Wide-field Infrared Survey Explorer (WISE) mission.

Comets, often nicknamed “cosmic snowballs” are icy, rocky objects made up of ice, rock and dust. These objects orbit the sun, and as they slip closer to the sun most comets heat up and start streaming two tails, one made of dust and gas and an “ion tail” made of electrically-charged gas molecules, or ions. Because it is especially bright, the comet is visible in the night sky with the naked eye. Skywatchers in the Northern Hemisphere can spot the object just after sunset, to the northwest just under the Big Dipper constellation. In fact, the comet is so bright that scientists are able to get a lot more and better data than they typically do for most comets.

Comet NEOWISE has two tails that typically accompany every comet. As a comet nears the sun, it warms up and material pulls away from the surface into a tail. Often, dust is pulled away along with gases from sublimating (going directly from solid to a gas) ice. This dust tail is the sweeping trail seen in most comet images. Comets also have an ion tail made up of ionized gas blown back by the solar wind. Comet NEOWISE is about 3 miles (5 kilometers) in diameter, which is a reasonably large but roughly average-size comet.

The comet is traveling at about 40 miles per second (that’s about 144,000 mph, or 231,000 km/h). Deputy principal investigator of the NEOWISE mission, said that the comet is moving about twice as fast as the Earth’s speed around the sun. However because of the comet’s extremely elliptical orbit, it will slow down as it reaches its farthest point from the sun, then fall back toward the inner solar system and accelerate again when it heads back round the sun. That trip around the sun is over for Comet NEOWISE’s current orbit and it’s moving back to the outer solar system.

The comet orbits the sun every 6,800 to 7,000 years and it is currently about 70 million miles (111 million kilometers) away from Earth. Further, Comet NEOWISE originates in our own solar system. To date, only two interstellar objects have been discovered: ‘Oumuamua and Comet Borisov.