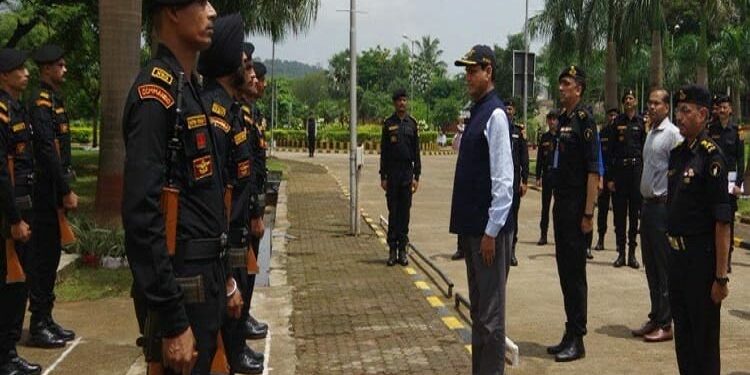 Army Chief General Manoj Naravane conferred the COAS (Chief of Army Staff) Unit Appreciation to 51 Special Action Group (SAG) of the National Security Guard (NSG) in recognition of the Group’s outstanding achievements in combating terrorism. The NSG was raised in 1984 and functions under the Union Home Ministry. The group’s most noteworthy operation is the Operation Black Tornado, during which it eliminated eight terrorists during the 2008 Mumbai terror attack, freeing over 600 hostages.

NSG is a federal contingency world class zero error force to deal with anti terrorist activities in all its manifestation. The NSG is a force specially equipped and trained to deal with special situations and is therefore, to be used only in exceptional circumstances to thwart serious acts of terrorism.

The ethos of the NSG is premised on the following:

The Union Cabinet in 1984 took a decision to create a federal contingency force comprising of personnel who are highly motivated, specially equipped and well trained to tackle the various manifestations of terrorism. In June 1984, a nucleus consisting of the Director General of NSG and other essential elements were sanctioned and steps were initiated to raise the force. A bill for creation of this organisation was introduced in the parliament in August 1986 and it received the assent of the President in September 1986 and the NSG formally came into being.

The basic philosophy of NSG is swift and speedy strike and immediate withdrawal from the theatre of action. NSG was modelled on the pattern of the SAS of the UK and GSG-9 of Germany. It is a task oriented force and has 2 complementary elements in the form of Special Action Group comprising army personnel and Special Rangers Group, comprising personnel drawn from CAPF/ state police forces.

Selection to NSG is demanding and has a drop out rate of about 70–80%. Three of their 14 months of training in Manesar, Haryana, are devoted to the basics. Physical fitness training has 26 elements, ranging from a cross-country obstacle course to jumping from heights and across divides and scaling different kinds of terrain. One endurance test involves martial arts, target shooting at the end of an obstacle-ridden cross-country run. This is meant to gauge the candidate’s performance under conditions of stress and exhaustion. Those who successfully complete the tests are sent for nine months of advanced training. Before being inducted into the NSG, aspirants also have to undergo a rigorous psychological test. The training includes learning to conduct urban counter-terrorism, underwater operations, house intervention, counter-UAV and anti-drone operations, bomb detection and disposal skills, apart from various other specialisations.