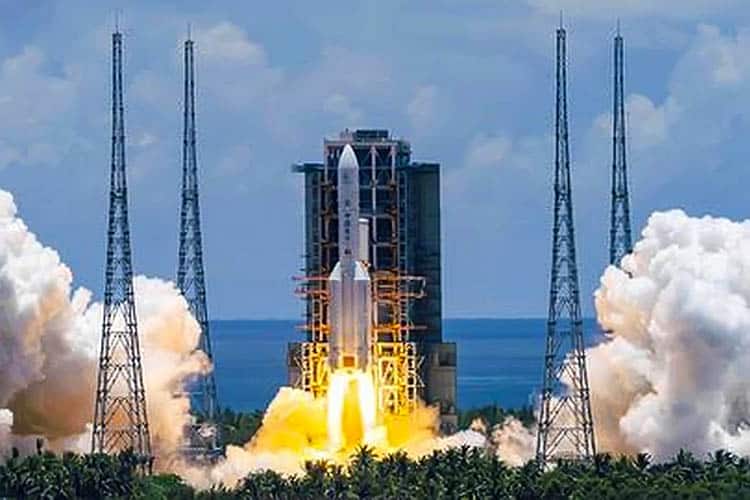 China successfully launched its first Mars probe, aiming to complete orbiting, landing and roving in a single mission, taking an ambitious step towards planetary exploration of the solar system.

A Long March-5 rocket, China’s largest and most powerful launch vehicle, carrying the spacecraft with a mass of about five tonnes, soared into the sky from the Wenchang Spacecraft Launch Site on the coast of southern China’s island province of Hainan. China aims to catch up with India, the US, Russia and the European Union to reach the red planet.

About 36 minutes after the launch, the spacecraft, including an orbiter and a rover, was sent into the Earth-Mars transfer orbit, embarking on an almost seven-month journey to the red planet. The Chinese Mars probe named Tianwen 1 or Quest for Heavenly Truth 1, will fulfil three scientific objectives: orbiting the red planet for comprehensive observation, landing on Martian soil and sending a rover to roam the landing site.

It will conduct scientific investigations into the planet’s soil, geological structure, environment, atmosphere and water. It should arrive in orbit around the red planet in February. The Long March 5 rocket will transport the robotic probe to the Earth-Mars transfer trajectory before the spacecraft begins its self-propelled flight toward Mars’ gravity field.

According to China Aerospace Science and Technology Corp, a State-owned space conglomerate, the probe at the farthest point of its orbit is about 400 million kilometres from Earth and 55 million kilometres at the nearest point. The probe consists of three parts — the orbiter, the lander and the rover — and they will separate in Mars orbit. The orbiter will remain in the orbit for scientific operations and to relay signals while the lander-rover combination makes an autonomous descent and landing.

The rover has six wheels and four solar panels and carries six scientific instruments. It weighs over 200 kilogrammes and will work for about three months on the planet. China in recent years has emerged as a major space power with manned space missions and landing a rover in the dark side of the moon. It is currently building a space station of its own. China’s previous attempt to send an exploratory probe to Mars called Yinghuo-1, in a Russian spacecraft in 2011 failed as shortly after the launch it was declared lost and later burnt during re-entry.