About Chief of Defence Staff(CDS)- 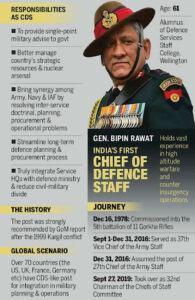 About the Department of Military Affairs-