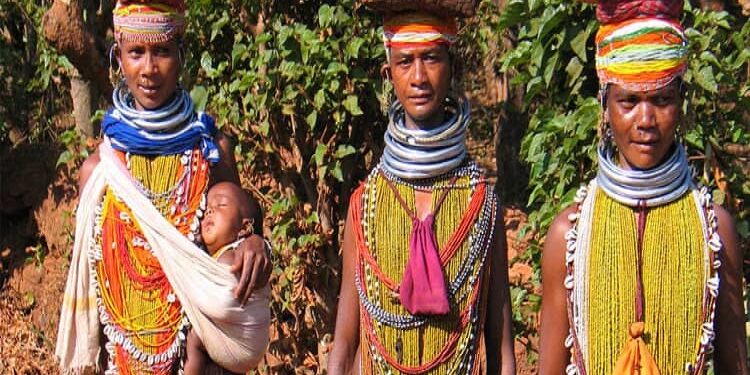 The COVID­19 pandemic has reached the Bondas, a tribal community residing in the hill ranges of Malkangiri district in Odisha. Four members of the community have tested positive for COVID­19. They have been isolated from the rest of the community members. Bondas, a particularly vulnerable tribal group (PVTG), live in settlements comprising small hutments in the hills of the Khairput block. Their population is around 7,000.

Odisha is home to 62 tribal communities — the largest diverse groups of tribal population in India. Thirteen of them are PVTGs. Tribal populations are found in the entire seven districts of Kandhamal, Mayurbhanj, Sundargarh, Nabarangpur, Koraput, Malkangiri and Rayagada, and in parts of six other districts. There are around 20 blocks where 13 PVTGs have sizable populations. None of the blocks have been spared by the pandemic.

The Bonda tribe of Odisha are believed to be part of the first wave of migration out of Africa about 60,000 years ago. They were the first forest settlers in India. Anthropologists say that they are members of a group of Austroasiatic tribes, who at some time in the ancient past migrated and settled in an area of about 130 sq km in the wild Jeypore hills. Till a few years ago, spotting a member of this elusive tribe was rare. But now they can be seen not only in other districts of Odisha, but also in neighbouring states such as Andhra Pradesh. History is repeating itself for the Bonda community and the story of one of the oldest tribes in the world is now taking a new turn. Earlier, only a few Bonda men migrated to nearby towns to earn a livelihood, but now women too have started abandoning their ancestral region. The community has not been able to meet its needs from the forests, which has forced them to work in the nearby towns in Odisha.

The rate of population growth among Bondas is very slow compared to other communities, with census 2011 saying there are just 12,000 Bondas left. What sets them apart from other PVTGs is that the Bondas have retained their identity and culture despite external interventions over the years. The Bondas continue to speak in their language, Remo, which comes under the Austroasiatic language belonging to the Mundari group. Their children are named after the day on which they were born. They have a unique dressing style—women are semi clad and wear various types of rings and necklaces around their bodies, while the men carry lethal bows and arrows.

A matriarchal society, the women prefer to marry men who are younger by at least 5-10 years, so that the men can earn for them when they grow old. The tribe is divided into three groups: the Upper Bondas or Bara-Jangar group, who live on the slopes at over 900 metres above sea level; the Lower Bondas, who live at the foothills, and the Gadaba-Bondas, who live at the same altitude as the Upper Bondas. Primarily forest dwellers, the Bondas used to hunt and forage for food in the wild. Researchers say the Bondas had fewer livelihood options as they were reluctant to work in plains. Depleting forest cover has affected their self-sufficient life. Bondas now practice shifting agriculture in the hills not only for consumption, but also to sell the produce in the markets.

Make PDF
Source: Down To Earth & The Hindu
Tags: Prelims