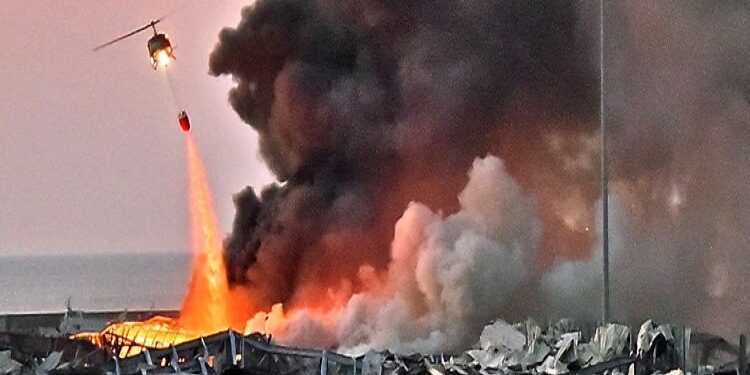 The catastrophic explosion at Beirut port that has so far killed at least 100 people and injured around 4,000, with an unknown number feared trapped under rubble was, according to the government of Lebanon, caused by over 2,700 tonnes of ammonium nitrate kept in storage for over six years.

Officials say the initial explosion ignited a fire, while the second one was more devastating with a mushroom cloud of smoke and fire enveloping the capital’s skyline and its shock waves battering buildings across the city and wounding thousands. The countdown to catastrophe in Beirut started more than six years ago when a troubled, Russian-leased cargo ship made an unscheduled stop at the city’s port.

The ship was trailed by debts, crewed by disgruntled sailors and dogged by a small hole in its hull that meant water had to be constantly pumped out. And it carried a volatile cargo, more than 2,000 tons of ammonium nitrate, a combustible material used to make fertilizers and bombs, that was destined for Mozambique. Embroiled in a financial and diplomatic dispute, it was abandoned by the Russian businessman who had leased it. And the ammonium nitrate was transferred to a dockside warehouse in Beirut, where it would languish for years.

Senior customs officials wrote to the Lebanese courts at least six times from 2014 to 2017, seeking guidance on how to dispose of the ammonium nitrate. The customs officials proposed a number of solutions, including donating the ammonium nitrate to the Lebanese Army, or selling it to the privately owned Lebanese Explosives Company. The judiciary failed to respond to any of the pleas.

In its pure form, ammonium nitrate (NH4NO3) is a white, crystalline chemical which is soluble in water. It is the main ingredient in the manufacture of commercial explosives used in mining and construction. Pure ammonium nitrate is not an explosive on its own. It is classified as an oxidiser under the United Nations classification of dangerous goods. If mixed with ingredients like fuel or some other contaminants, or because of some other external factors, it can be very explosive.

Large quantities of stored ammonium nitrate are regarded as a major fire hazard, with multiple reported cases across the world. The explosion of large storage can happen primarily in two ways. One is by some type detonation or initiation because the storage comes in contact with explosive mixture. Second, the blast can result due to a fire which starts in the ammonium nitrate store because of the heat generated due to the oxidation process at large scale. The second one seems to be the primary likely cause of the incident at Beirut port.