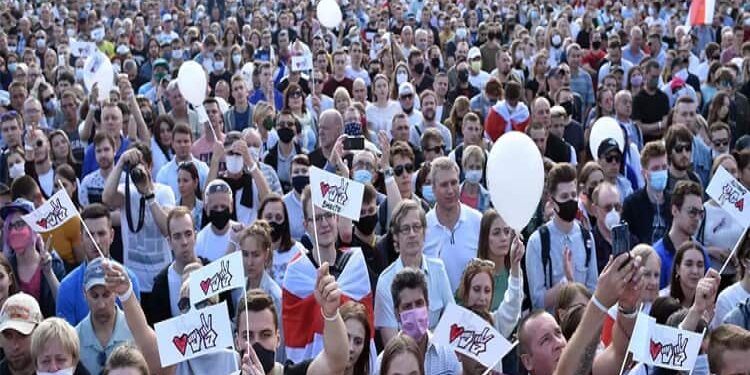 Belarus’s opposition has issued a message of defiance, rejecting the results of a presidential election marred by vote-rigging as the country braced for protests against President Alexander Lukashenko.

Lukashenko, who is facing the deepest crisis of his 26 years in power, has threatened to crush any illegal rallies. He claimed that the protests were being directed from abroad, singling out Poland, Britain, and the Czech Republic. The country’s election commission reported that Lukashenko had won 80.08% of the vote while Tikhanovskaya took just 10.09%, despite a popular wave of support for the opposition candidate, whose political rallies have drawn some of the country’s largest crowds since the days of the Soviet Union. The result has sparked mass protests in Belarus — including a demonstration in the capital, Minsk, that drew about 5,000 people. Police used stun grenades, water cannons and rubber bullets to break up the protests.

Similar, preliminary results prompted unprecedented protests in cities across the country, posing the greatest threat to Lukashenko, often referred to as Europe’s last dictator, since he came to power. Foreign observers have not declared a Belarusian election free and fair since 1995. The poll had no independent observers. The Organization for Security and Co-operation in Europe (OSCE), which observes elections on the continent, did not receive a timely invitation.

Lukashenko’s victory was quickly endorsed by Xi Jinping of China and Vladimir Putin of Russia. In a congratulatory message, Putin urged Lukashenko to consider further economic and legal integration with Russia, which the opposition has warned would undermine Belarus’s sovereignty. Ursula von der Leyen, the president of the European commission, called for Belarus to publish accurate results, and condemned the violence against opposition supporters. “Harassment and violent repression of peaceful protesters has no place in Europe,” she said.

Analysts said it was the deepest crisis Lukashenko had faced in his career. He was already facing unprecedented anger over his handling of the economy and a bungled coronavirus response. Before the elections he jailed opposition candidates and targeted foreign allies, accusing Moscow of sending mercenaries to destabilise the country.