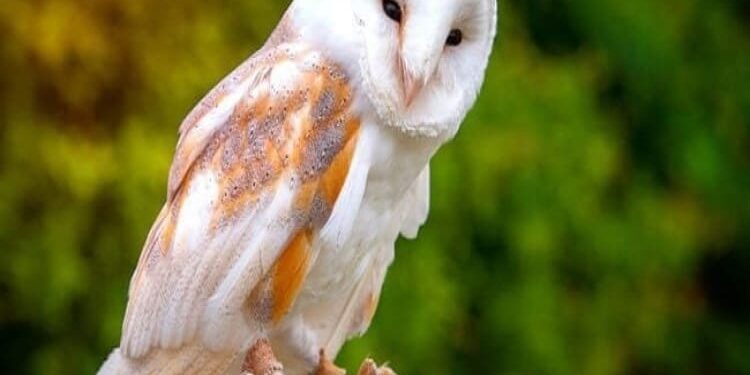 Barn Owls (Tyto alba) are one of the most widespread owls in the Indian subcontinent. The word Tyto has been derived from the Greek word ‘tuto’, meaning night. This explains its nocturnal nature, and the word alba,which corresponds to its white or dull white colour. Owls have one of the most fascinatingly coloured eyes in birds but the Barn Owl exhibits dark eyes, and a distinct heart-shaped facial disc.

These owls are medium-sized with long legs and wings and have a relatively shorter tail when compared to other similar sized owls. This owl doesn’t have the characteristic ‘woo-woo-woo’ hoot of owls and utters a screechy ‘shreee’ to protect its territory. This cry is often heard during their courtship as well. Barn owls are predominantly nocturnal by nature and are more often heard than seen. According to several references, not only do barn owls pair for life, they also exhibit aerial displays and make purring sounds before mating, to strengthen their bond.

Owls exhibit unique stealth when they hunt at night. They have a delicate sense of hearing and their eyes are very sensitive to movement, even in low light, making them one of the most prolific hunters in the animal world. Usually, the bigger the bird, the more sound it makes while flapping its wings, but, most night-hunting owls break that stereotype. They have unique wing and feather features that help them fly almost soundlessly through trees. Their sound-dampening structures help them fly inaudibly so that their prey can’t hear them coming. This quality may also help owls in hearing their prey more intently.

The Barn Owl mostly hunts small mammals, especially rodents (hence it’s called the ‘farmer’s friend’). Owls often regurgitate undigested bones, feathers from their prey in the form of pellets, the colour of which can tell us what their recent prey has been. These owls prefer the open countryside and barns, but have adapted rather well to urban biodiversity. They prefer palm trees to roost and are perhaps the only known owls to nest on ledges in buildings around human settlements. This, however, might not be due to lack of trees, but due to their dependence on rodents thriving near human habitation (as a result of inefficient waste disposal), thus controlling rodent population.

Owls, and especially Barn Owls, have been associated with all sorts of omens. While C.S. Lewis in his fantasy series, the Chronicles of Narnia, considered them wise and most suited to run a ‘parliament’, other myths do not look at them in such light. The Banshee’s wail, an omen of death, is inspired from the Barn Owl’s screech. In Indian mythology, they are the vahanas (vehicles) of Lakshmi, the goddess of wealth. Some consider an owl sighting during the festival of Diwali extremely lucky, while some take drastic measures to accumulate the good luck. Owl sacrifices are held throughout parts of North India to gain more wealth, on the basis of a superstition.