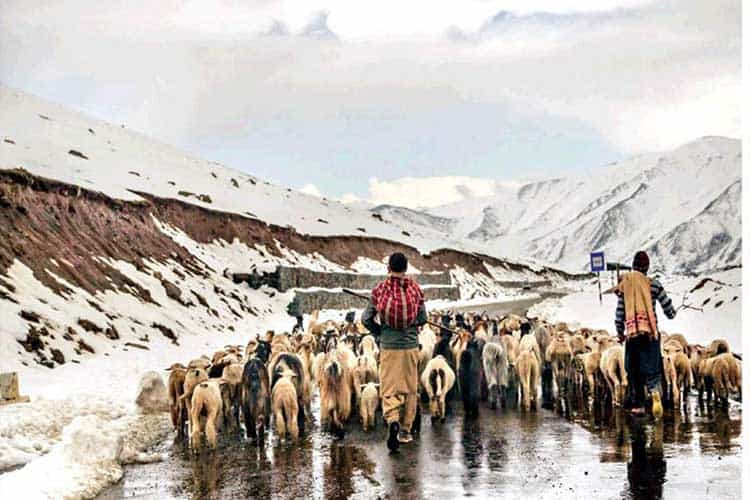 The nationwide lockdown to curb the spread of Covid-19 has disrupted the long spring migration of hundreds of thousands of Bakarwals and Gujjars, who are nomadic pastoral tribes. The biggest impact of the delayed transhumance, the term for seasonal migration of livestock, will be reduced food availability for the animals.

The Bakarwals are known to be part of the larger ethnic group, the Gujjars who dominate large parts of Northern India, Pakistan and Afghanistan. Interestingly, the Gujjars in different parts of the subcontinent variously follow Islam, Hinduism and Sikhism. In Jammu and Kashmir, the group practices Islam, but was listed as a Scheduled Tribe in 1991. However, despite professing the Islamic faith, anthropological study of the community shows that they have retained large parts of the Hindu belief system followed by Gujjars across the country.

Up to 1.5 million Gujjars and Bakarwals live in Jammu, Kashmir and Ladakh – around 11.9% of the region’s total population as per the 2011 Census. In Jammu, the 810,800 Gujjar and Bakarwals comprise more than 54% of the tribal population. The other nomadic herders in the state are the Gaddis and the Sippis, but their seasonal migration is limited and only across districts.

One of the Bakarwals Moulvi Ghulam Din was bestowed with prestigious Ashok Chakra for the courageous role in ensuring that villagers did back Indian Army not the Pakistani guerrillas in the Sawjian sector during the 1965 war. Again after the 1971 war, a nomad woman Mali Bi was lauded and awarded for her tip-offs on Pakistani guerrillas in the Poonch area. Prior to the 1999 Kargil War, members of the Bakarwal community had informed the Army about Pakistani infiltration.