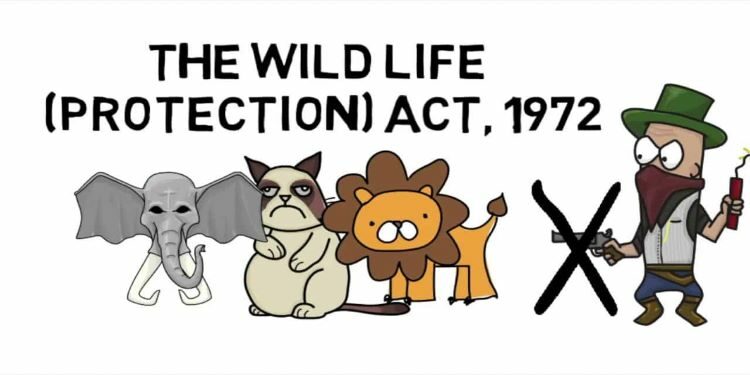 In news : Probe has been instituted into a case of turtle poaching under Wildlife (Protection) Act, 1972

About the Wildlife (Protection) Act, 1972

India’s Wildlife Protection Act of 1972 is a comprehensive piece of legislation that regulates sanctuaries, national parks, and zoos among other protected locations.

The Act provides the legal framework for the protection of various species of wild animals, management of their habitat and also for the regulation and control of trade in the products derived from various parts of wild animals. The Act has been amended earlier in 1982, 1986, 1991, 1993, 2003 and 2006 and 2013

Aim : Its primary aim is to curb the illegal trade in wildlife and the derivative parts.

The act provides for appointment of Director and other officers.

It states that the Central Government may, for the purposes of this Act, appoint

National Board for Wild Life & its Composition

It states that Central Government shall, within three months from the date of commencement of the Wild Life (Protection) Amendment Act, 2002 , constitute the National Board for Wild Life consisting of the following members, namely:

The term of office of the members other than those who are members ex officio, the manner of filling vacancies referred to in clauses (e), (f) and (v) of sub-section (1), and the procedure to be followed in the discharge of their functions by the members of the National Board shall be such, as may be prescribed.

Standing Committee of the National Board.

Functions of the National Board

Constitution of State Board for Wild Life

The State Government shall, within a period of six months from the date of commencement of the Wild Life (Protection) Amendment Act, 2002 (16 of 2003) constitute a State Board for Wild Life consisting of the following members, namely: