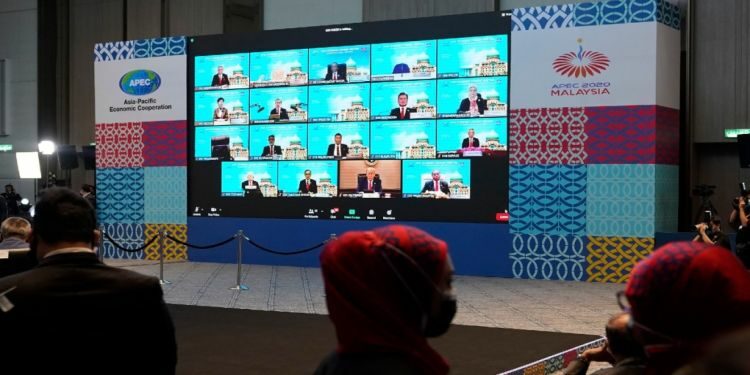 APEC is recognized as one of the highest-level multilateral blocs and oldest forums in the Asia-Pacific region and exerts a significant global influence. It has grown to become a dynamic engine of economic growth. India should reassess whether the time has come for it to truly capitalize on its membership in APEC, and accordingly prioritize this goal in its foreign policy.

In news: APEC virtual meet, 2020 was hosted by Malaysia.
Placing it in syllabus: Foreign affairs

Combatting and mitigating the impacts of COVID-19

Improving the narrative of trade and investment

The objectives of APEC are summarized in the Seoul Declaration:

(2) to enhance the positive gains, both for the region and the world economy, resulting from increasing economic interdependence;

(3) to develop and strengthen the open multilateral trading system in the interest of Asia-Pacific and all other economies;

(4) to reduce barriers to trade in goods and services and investment among participants in a manner consistent with GATT principles without detriment to other economics.

India is the fastest growing large economy, a rising actor in the Asia-Pacific, and an increasingly legitimate stakeholder in regional and global governance. More than two decades after first knocking on APEC’s doors, India is yet to get the membership.

India’s growth trajectory aligns with APEC’s agenda of enhancing regional integration through trade and investment liberalisation and facilitation across the Asia-Pacific. India is the fourth largest global economy and its share of world GDP has more than doubled in the last 30 years.

The benefits on offer to APEC member economies by the addition of India to the forum include increased access to India’s labour force and booming consumer markets, as well as increased investment opportunities. In return, India will gain opportunities to raise its trade and investment profile in the region, gain access to APEC’s resources and expertise and proactively participate in topics of conversation at APEC forums such as automation, SMEs, and women’s economic participation.

However a significant divergence exists between India and APEC in terms of inclination, behaviour and appetite on economic and trade issues.

Not all APEC member economies subscribe to the concept of the Indo-Pacific, but they insist on “more obvious candidates” in the Pacific proper for future membership.