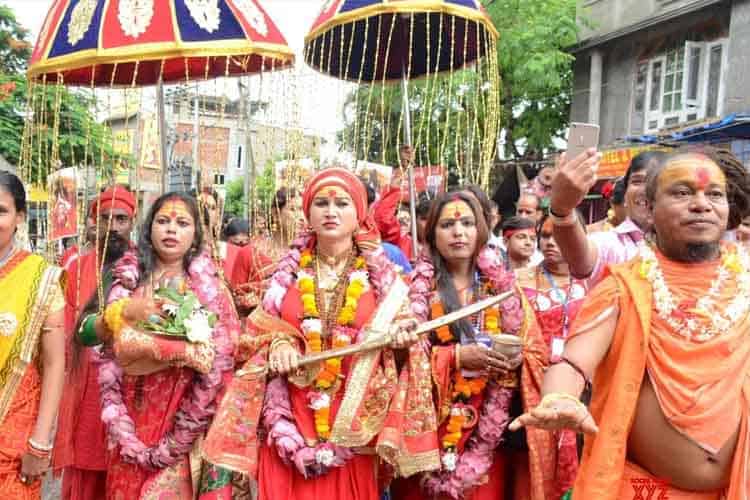 India is host to several festivals marked by different kinds of celebrations. Some of the regional festivals are known for religious congregations on a large scale. Ambubachi festival is such a festival and Assam’s largest, centered around Kamkhya Devi.

Ambubachi Mela is one of the biggest congregations of eastern India. It is the most important festival of the Kamakhya temple and is celebrated in the month of June every year.

It is more of a ritual of austerities, a festival celebrated with Shakti rites. The belief is that Kamakhya embodies the mother cult, the Shakti. During the period of Ambubachi from the seventh to the tenth day of the Hindu month of Asadha, the doors of the shrine are closed to all as it is believed that Goddess Kamakhya goes through the annual cycle of menstruation. On the twelfth day, the doors are opened ceremonially and a big fair is held at the temple premises on that day.

Ambubachi means spoken with water and it also implies that the rains expected during this month make the earth fertile and ready for procreation. Daily worship is suspended during this period. All agricultural work like digging, ploughing, sowing, and transplanting of crops are forbidden. Widows, Brahmacharis and Brahmins avoid cooked food during these days.

On the fourth day, Ambubachi being over, household items, utensils and clothes are washed, cleaned and purified by sprinkling sacred waters, worship of Goddess Kamakhya begins after cleansing and other rituals are performed. Entry to the Shrine is considered to be auspicious after this.

Legends say the temple atop the Nilachal Hills, whose northern face slopes down to the Brahmaputra river, was built by the demon king Narakasura. But records are available only from 1565 when Koch King Naranarayana had the temple rebuilt.

Kamakhya is one of 51 shakti peethas or holy sites for the followers of the Shakti cult, each representing a body part of the Sati, Lord Shiva’s companion. The temple’s sanctum sanctorum houses the yoni – female genital – symbolised by a rock.

The festival will not be held for the first time in six centuries, but priests of the temple will perform the rituals in-house while maintaining social distancing.