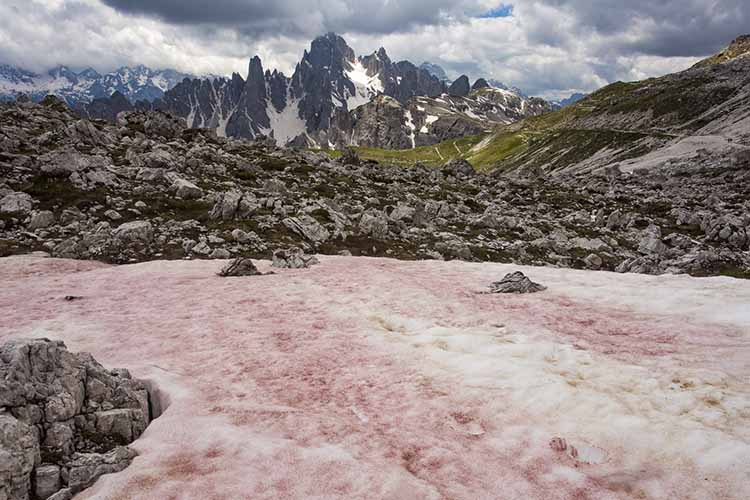 Scientists in Italy are investigating the mysterious appearance of pink glacial ice in the Alps, caused by algae that accelerate the effects of climate change. There is debate about where the algae come from, but it is believed that the pink snow observed on parts of the Presena glacier is likely caused by the same plant found in Greenland.

The alga is not dangerous, it is a natural phenomenon that occurs during the spring and summer periods in the middle latitudes but also at the Poles. The plant, known as Ancylonema nordenskioeldii, is present in Greenland’s so-called Dark Zone, where the ice is also melting.

Normally ice reflects more than 80% of the sun’s radiation back into the atmosphere, but as algae appear, they darken the ice so that it absorbs the heat and melts more quickly. More algae appear as the ice melts more rapidly, giving them vital water and air and adding red hues to the white ice.

Extremophile microscopic algae, or so-called ‘glacier algae’, are able to live in the upper few centimetres of ice on the surfaces of glaciers and ice sheets and can form widespread blooms during the summer melt season. Glacier algal blooms on the Greenland Ice Sheet are so extensive that their presence in the surface ice is thought responsible for widespread darkening along the western margin of the ice sheet known as the ‘dark zone’ that has appeared in satellite observations over the last two decades.

A study has revealed how glacier algae produces a unique phenolic ‘sunscreen’ pigment. It serves to capture and absorb most of the intense sunlight that the algae receive where they live on the surface of the ice sheet, protecting the algae’s chloroplasts, which are located underneath vacuoles filled with this pigment, from excessive UV and visible radiation. The energy that is absorbed by this sunscreen pigment is subsequently available to the cell as heat for melt generation-an incredibly clever mechanism for algae that lives in an icy world, where access to liquid water is a major limitation on growth and survival.