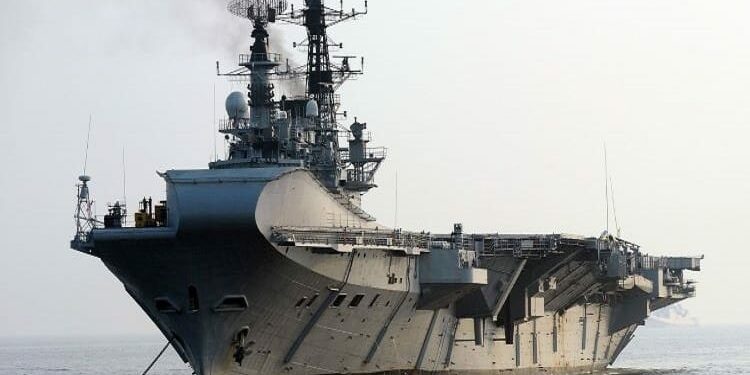 Decommissioned aircraft carrier Viraat, which has been lying at the Naval dockyard in Mumbai, is set to be scrapped at a ship breaking yard at Alang in Gujarat soon. It has been sold to the Shree Ram Green Ship Recycling Industries of Gujarat in an e auction by the Metal Scrap Trade Corporation Limited (MSTC).

Several attempts by the Navy to preserve the carrier, by converting it into a museum or by other means, failed. The government informed Parliament in July last year that it had been decided to scrap the carrier. Viraat, a Centaur class aircraft carrier weighing 27,800 tonnes, served in the British Navy as HMS Hermes for 25 years from November 1959 to April 1984. It was commissioned into the Indian Navy in May 1987 after refurbishment and had operated Harrier fighter jets.

It was decommissioned in March 2017, and the Navy had been incurring expenditure since then on its upkeep, such as the provision of electricity and water, and repairs. It was also taking up space in the crowded Naval dockyard. There had been demands from various quarters to not let Viraat go the way of Vikrant, India’s first carrier that was eventually scrapped. Vikrant, also a Centaur class, too, was maintained by the Navy in Mumbai for 17 years as various proposals to convert it into a museum went back and forth unsuccessfully before the ship was eventually sent to a scrapyard in 2014. Several States had submitted proposals, but none of them fructified.

At its most basic level, an aircraft carrier is simply a ship outfitted with a flight deck — a runway area for launching and landing airplanes. This concept dates back almost as far as airplanes themselves. Within 10 years of the Wright Brothers’ historic 1903 flight, the United States, the United Kingdom and Germany were launching test flights from platforms attached to cruisers. The experiments proved largely successful, and the various naval forces started adapting existing warships for this purpose. The new carriers allowed military forces to transport short-range aircraft all over the world.

Carriers didn’t play a huge role in World War I, but they were central to the air combat of World War II. For example, the Japanese launched the 1941 attack on Pearl Harbor from aircraft carriers. Today, super aircraft carriers are a crucial part of almost all major military operations. While the ship itself isn’t especially useful as a weapon, the air power it transports can make the difference between victory and defeat. Carriers can move in excess of 35 knots (40 mph, 64 kph), which gives them the ability to get anywhere in the ocean in a few weeks.