The ageing of large dams –an emerging global development issue as tens of thousands of existing large dams have reached or exceeded an “alert” age threshold of 50 years, and many others will soon approach 100 years. These aged structures incur rapidly rising maintenance needs and costs while simultaneously declining their effectiveness and posing potential threats to human safety and the environment.

In news: UN report cautions that ageing dams in India, US, other nations pose a growing threat
Placing it in syllabus: Disaster Management

Highlights of the UN report

According to the report in India :

Ageing of dams in India

The following is the list of major dams that are older than 50 years in India: 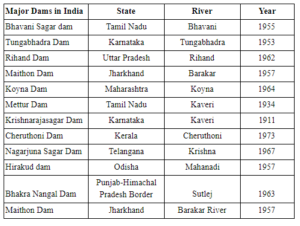 Other notable Dam related tragedies are as below:

Currently, the decision of how to manage the ageing Mullaperiyar dam is hotly debated and working through the court system. A dam failure risk would be catastrophic: nearly 3.5 million people will be affected.

Overall, dam decommissioning should be seen as equally important as dam building in the overall planning process on water storage infrastructure developments.

The dams and reservoirs world over have been playing a dual role of harnessing the river waters for accelerating socio-economic growth and mitigating the miseries from the vagaries of floods and droughts.

Water for Drinking and Industrial Use:

Mould your thought: What are the emerging challenges of ageing large dams in India? What can be done to mitigate these risks?Approach to the answer: