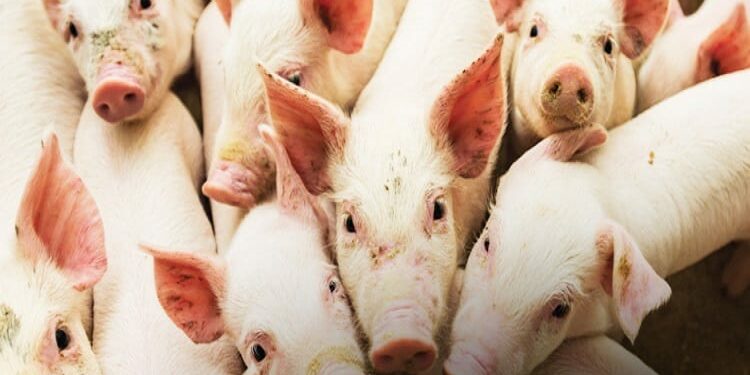 African swine fever (ASF) is a highly contagious hemorrhagic viral disease of domestic and wild pigs, which is responsible for serious economic and production losses. It is caused by a large DNA virus of the Asfarviridae family, which also infects ticks of the genus Ornithodoros. ASF is a disease listed in the World Organisation for Animal Health (OIE) Terrestrial Animal Health Code and must be reported to the OIE. The epidemiology of ASF is complex and varies depending on the environment, types of pig production systems, the presence/ absence of competent tick vectors, human behaviour, and the presence/ absence of wild pigs. Routes of transmission can include:

Clinical signs and mortality rates can vary according to the virulence of the virus and the type/ species of pig. ASF however is not a risk to human health. Acute forms of ASF are characterised by high fever, depression, anorexia and loss of appetite, haemorrhages in the skin (redness of skin on ears, abdomen and legs), abortion in pregnant sows, cyanosis, vomiting, diarrhoea and death within 6-13 days (or up to 20 days). Mortality rates may be as high as 100%. Subacute and chronic forms are caused by moderately or low virulent viruses, which produce less intense clinical signs that can be expressed for much longer periods. Mortality rates are lower, but can still range from 30-70%. Chronic disease symptoms include loss of weight, intermittent fever, respiratory signs, chronic skin ulcers and arthritis.

Different types of pig may have varying susceptibility to ASF virus infection. African wild suids may be infected without showing clinical signs allowing them to act as reservoirs. Currently there is no approved vaccine for ASF. Prevention in countries free of the disease depends on implementation of appropriate import policies and biosecurity measures, ensuring that neither infected live pigs nor pork products are introduced into areas free of ASF. This includes ensuring proper disposal of waste food from aircraft, ships or vehicles coming from affected countries and policing illegal imports of live pigs and pork products from affected countries.

During outbreaks and in affected countries, control of ASF can be difficult and must be adapted to the specific epidemiological situation. Classic sanitary measures may be employed including early detection and humane killing of animals (with proper disposal of carcases and waste); thorough cleansing and disinfection; zoning/ compartmentalisation and movement controls; surveillance and detailed epidemiological investigation; strict biosecurity measures on farms.