75 Years of Nagasaki and Hiroshima 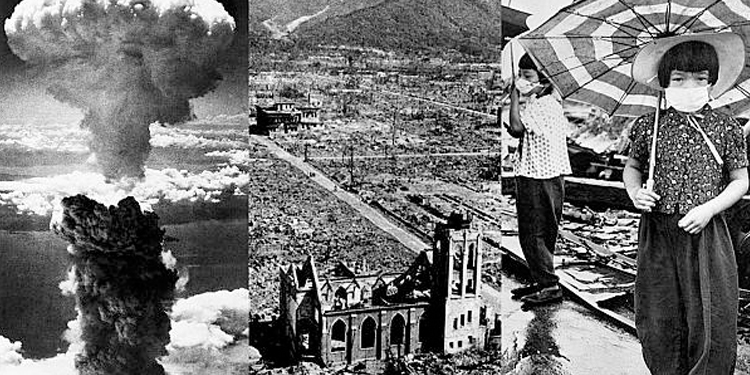 It is 75 years since the US dropped atomic bombs on the Japanese cities of Hiroshima and Nagasaki on 6 and 9 August, leading to the end of World War Two. By the end of 1945, the bombing had killed an estimated 140,000 people in Hiroshima, and a further 74,000 in Nagasaki. In the years that followed, many of the survivors would face leukemia, cancer, or other terrible side effects from the radiation.

Those who survived the bombings are known as “hibakusha“. Survivors faced a horrifying aftermath in the cities, including psychological trauma. The bombings brought about an abrupt end to the war in Asia, with Japan surrendering unconditionally to the Allies on 14 August 1945. But critics have said that Japan was already on the brink of surrender.

Following the end of the fighting in Europe on 7 May 1945, the Allies told Japan to surrender by 28 July, but the deadline passed without them doing so. An estimated 71,000 soldiers from Britain and the Commonwealth were killed in the war against Japan, including more than 12,000 prisoners of war who died in Japanese captivity. On 6 August 1945 at 08:15 Japanese time, an American B-29 bomber plane named Enola Gay dropped an atomic bomb on Hiroshima. It was the first time an atomic bomb had ever been used in a war. The Hiroshima bomb, known as “Little Boy”, contained the equivalent of between 12,000 and 15,000 tons of TNT and devastated an area of 13sq km (5sq miles).

However, Japan did not surrender. Three days later, the Americans dropped another atomic bomb on the city of Nagasaki at 11:02 Japanese time. Japan surrendered unconditionally on 14 August. On the same day, US President Harry Truman gave an address to a crowd gathered outside the White House in which he said: “This is the day we have been waiting for since Pearl Harbor. This is the day when fascism finally dies, as we always knew it would.”

The following day, Japan’s Emperor Hirohito was heard on the radio for the first time ever in a broadcast in which he blamed the use of “a new and most cruel bomb” for Japan’s unconditional surrender. Over half of the deaths that occurred immediately after the bombings were caused by burns and fires. Many people were also killed or severely wounded by flying debris. Others died when buildings collapsed. Still others were thrown into the air. The explosions also gave off harmful radiation with short-term and long-term effects. Radiation sickness affected many of the people who survived the immediate devastation in both cities. Acute radiation syndrome – vomiting, headaches, diarrhoea, haemorrhage and loss of hair – caused death in a few weeks or months.

Julian Assange and his extradition order